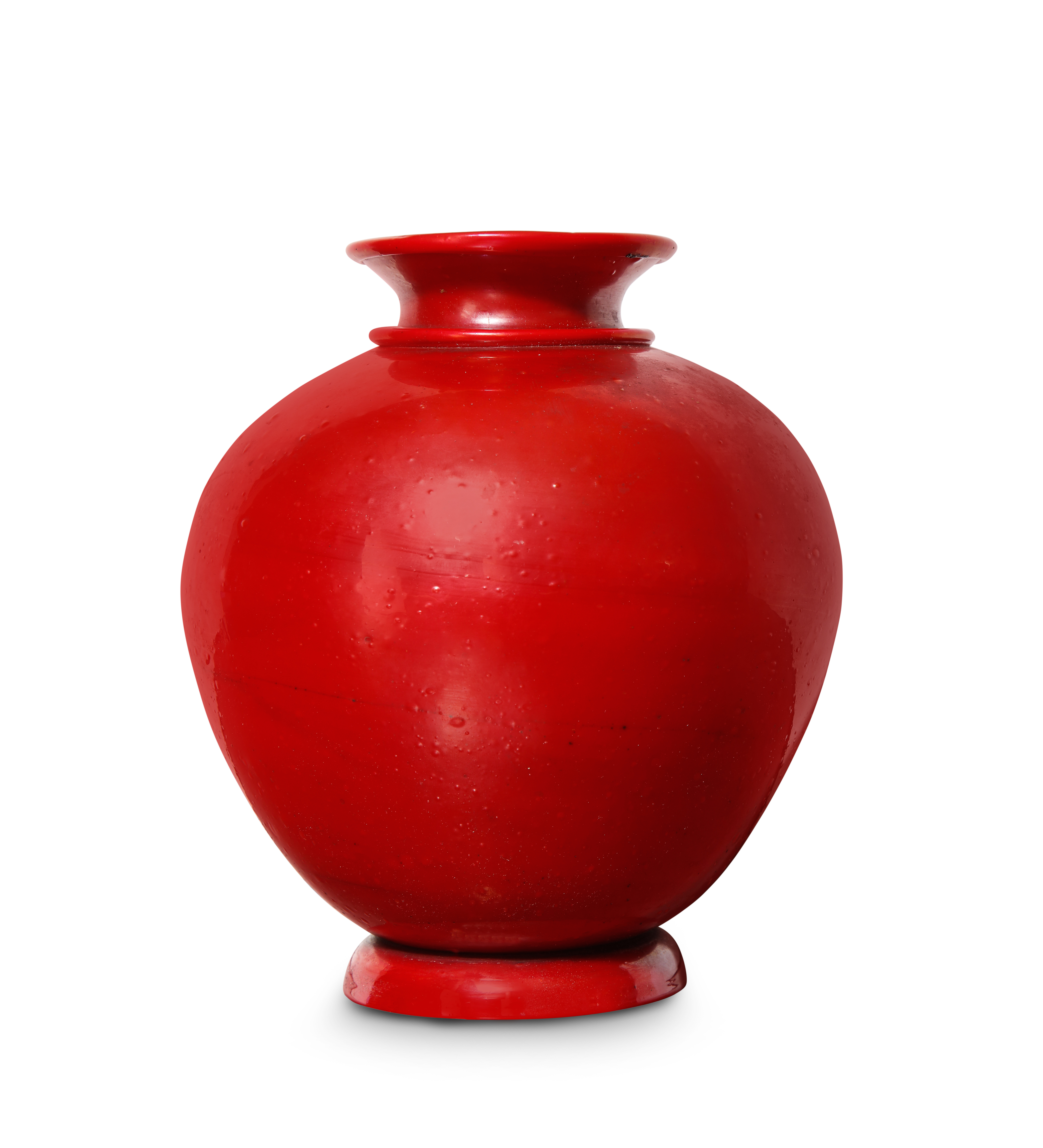 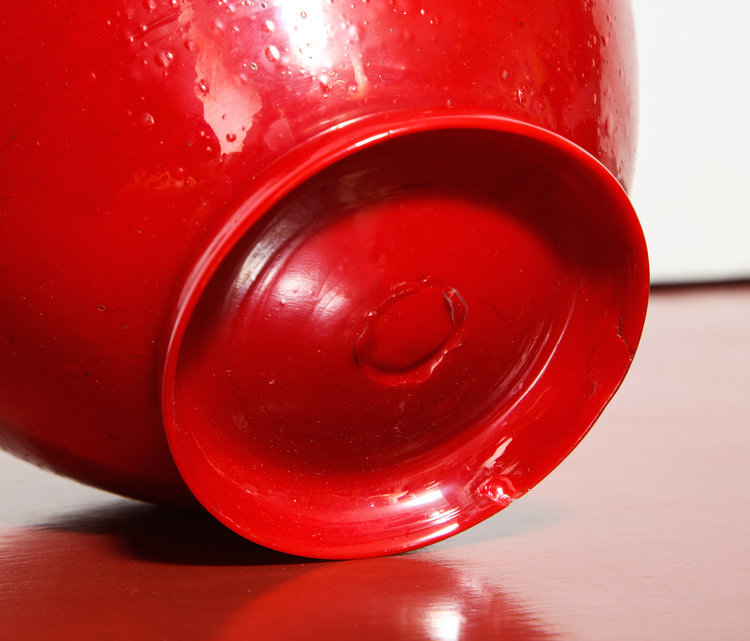 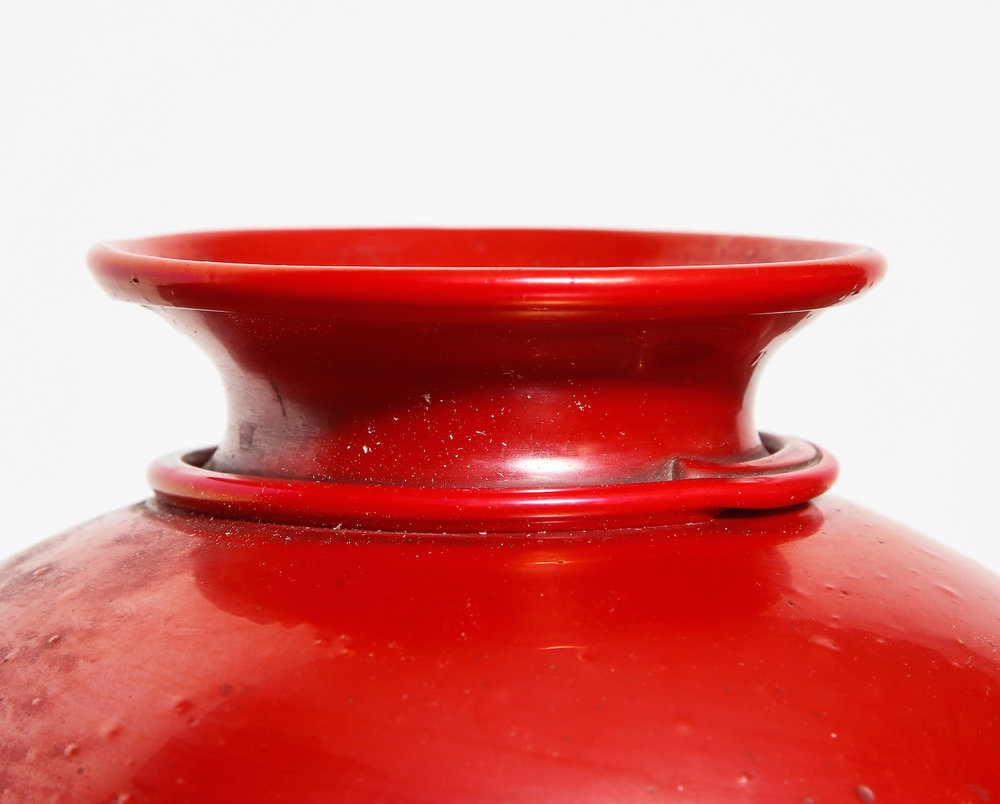 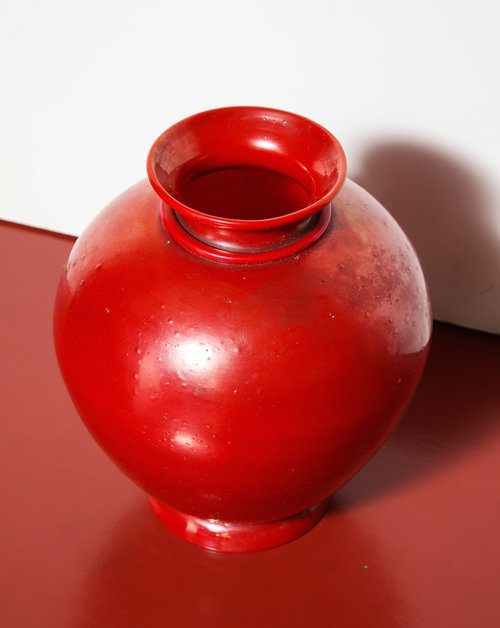 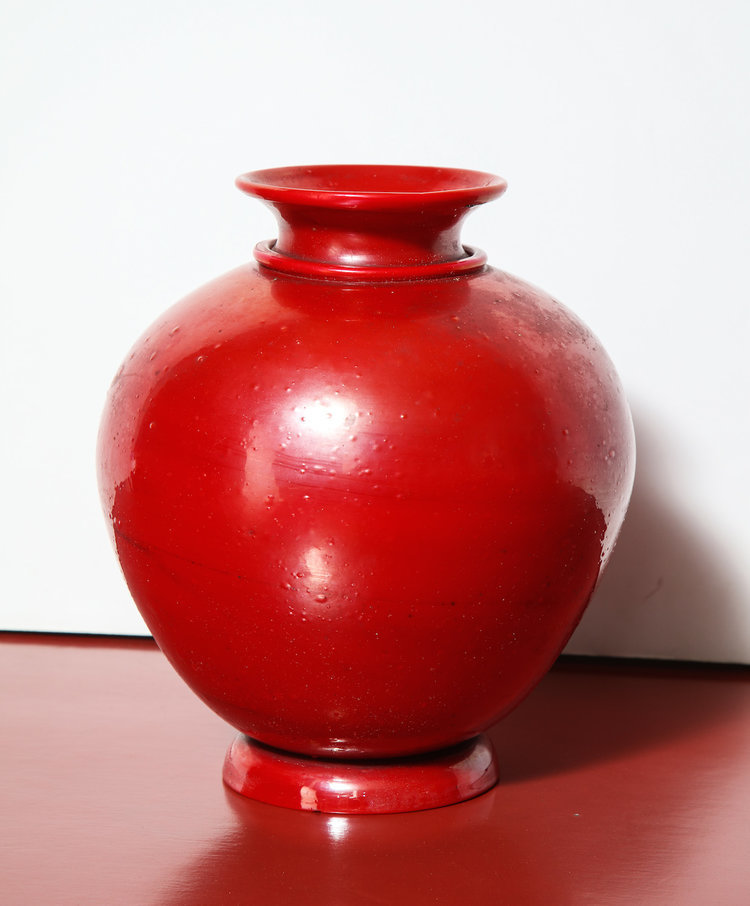 Opaque red "pasta" glass with low domed foot, flared opening at top and applied ring at the base of the neck

Before Carlo Scarpa (1906-1978) began designing some of Italy’s most celebrated modernist buildings, he spent more than 20 years experimenting with Venetian glass. His glassware is now highly collectible and regarded as a milestone in modernist decorative art....READ MORE

This rare, early vase was created by one of the most celebrated designers of Murano glass.  Opaque red "pasta" glass with low domed foot, flared opening at top and applied ring around the base of the neck.  The density, texture and variation of color displayed in this vase is consistent with other examples of Scarpa's work from this period.  This is a rare example of this type of work, and no other documented examples of this form are known to exist.

Scarpa grew up in the Veneto region of Italy, and Venice was a source of inspiration throughout his career. In 1926, the year he graduated from the Accademia di Belle Arti, he started work at M. V. M. Cappellin glassworks. At the time, Venice was experiencing a renewed interest in its cultural heritage. Glassmaking was one of Venice’s oldest traditions and Scarpa was a keen supporter of its revival.

‘Scarpa engaged in glassmaking as a way of knowing Venice, his place in the world, and the city’s history, culture and architecture,’ explains Robert McCarter, Professor of Architecture at Washington University in St. Louis. ‘Glass is inextricably linked to Venice and represents the roots of Scarpa’s creativity.’

Little is known about Scarpa’s role at Cappellin, but it offered the necessary experience for him to join Venini glassworks as an artistic consultant in 1932. Scarpa spent the next 15 years with Venini, pushing the boundaries of Venetian glassblowing techniques. One of the first styles he pioneered was the bollicine, named after the tiny bubbles of air suspended within the glass. Two years later, he developed the mezza filigrana style, creating very thin glassware decorated by internal swirling lines.

Scarpa ended his partnership with Venini in 1947 to pursue a career in architecture, but continued to bring the principles that influenced his glasswork — transparency, reflection, detail and history — into the spaces that he designed. As McCarter notes, Scarpa even used pieces of glass paste from Murano factories in the terrazzo flooring of the Olivetti Showroom in Venice, designed by Scarpa in the late 1950s. Although Scarpa never returned to working with glass, Venini continues to reproduce a selection of his glass series today.