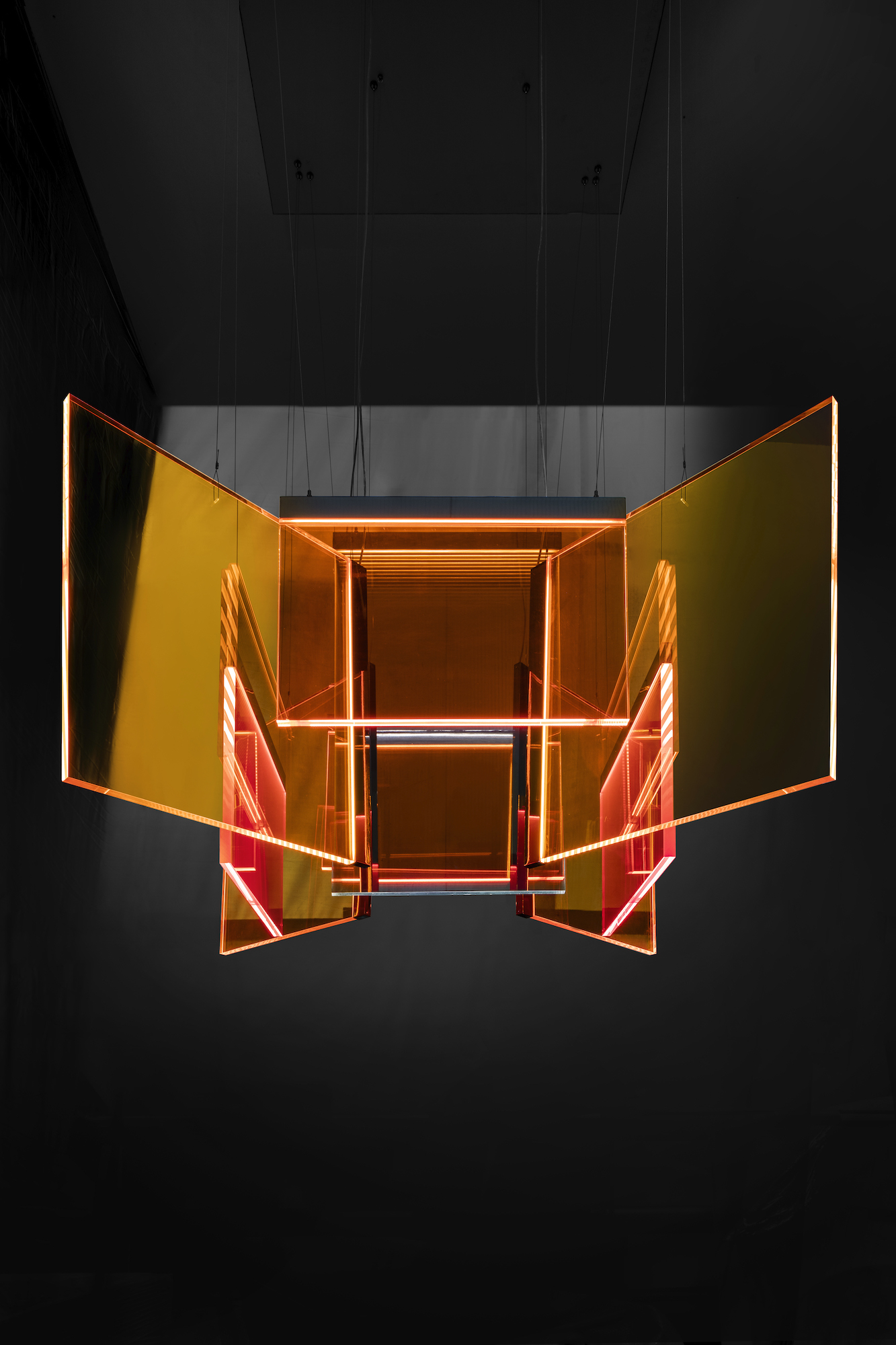 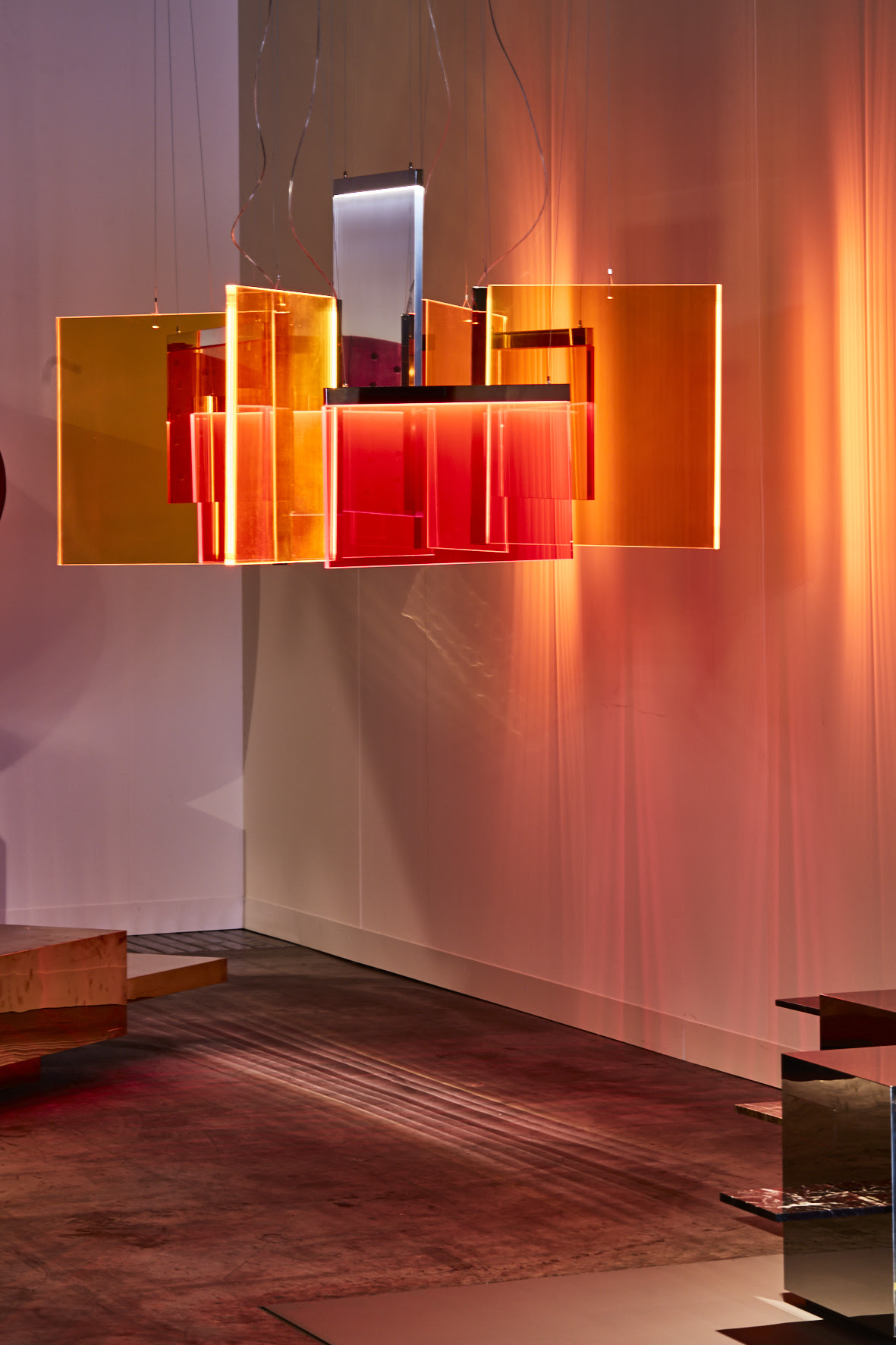 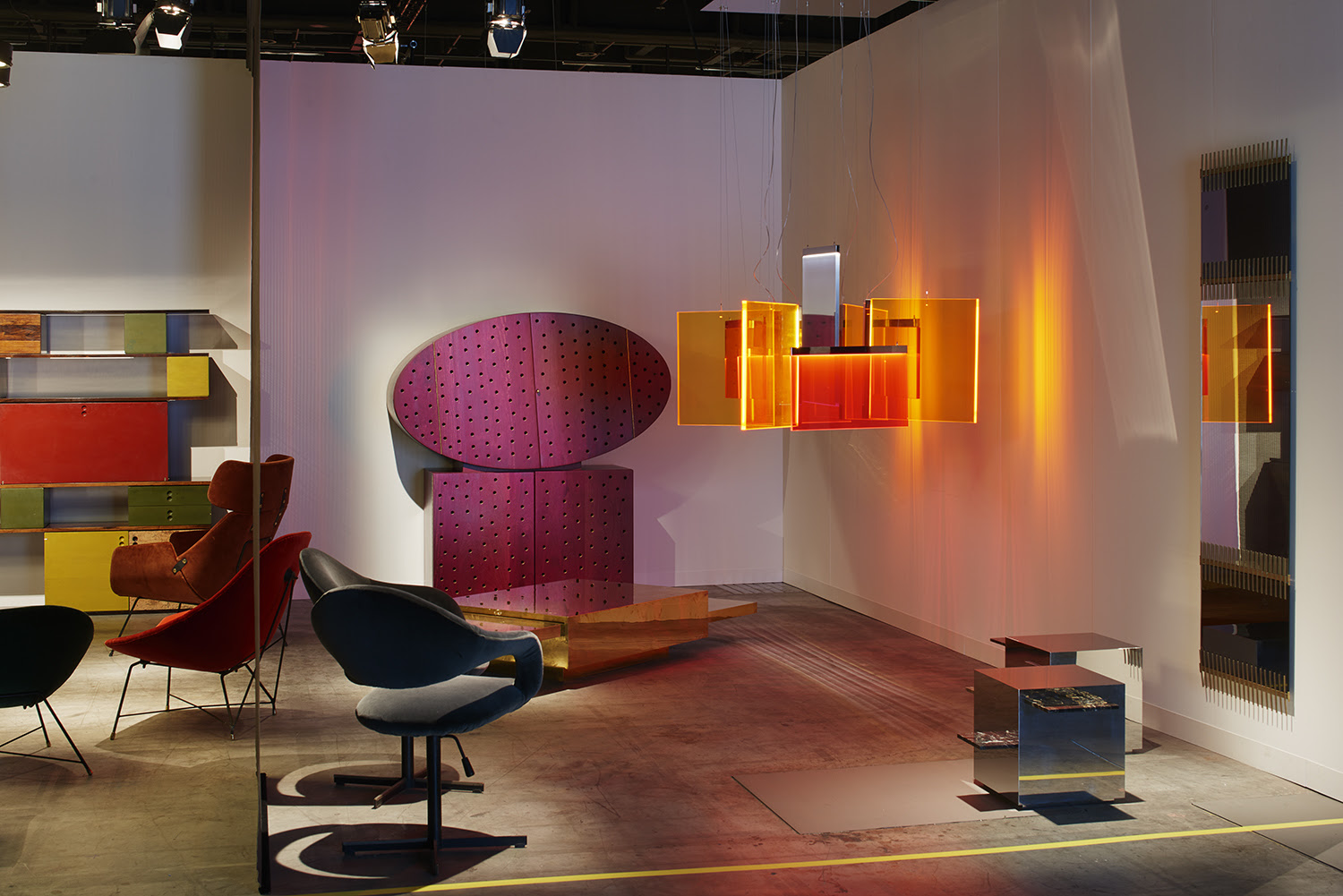 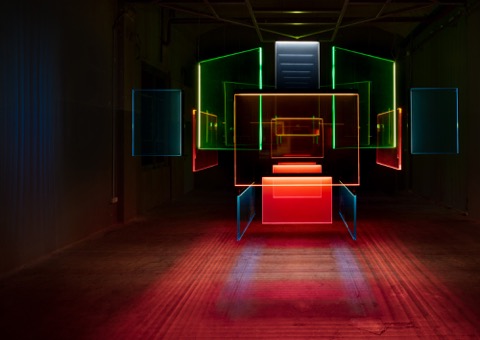 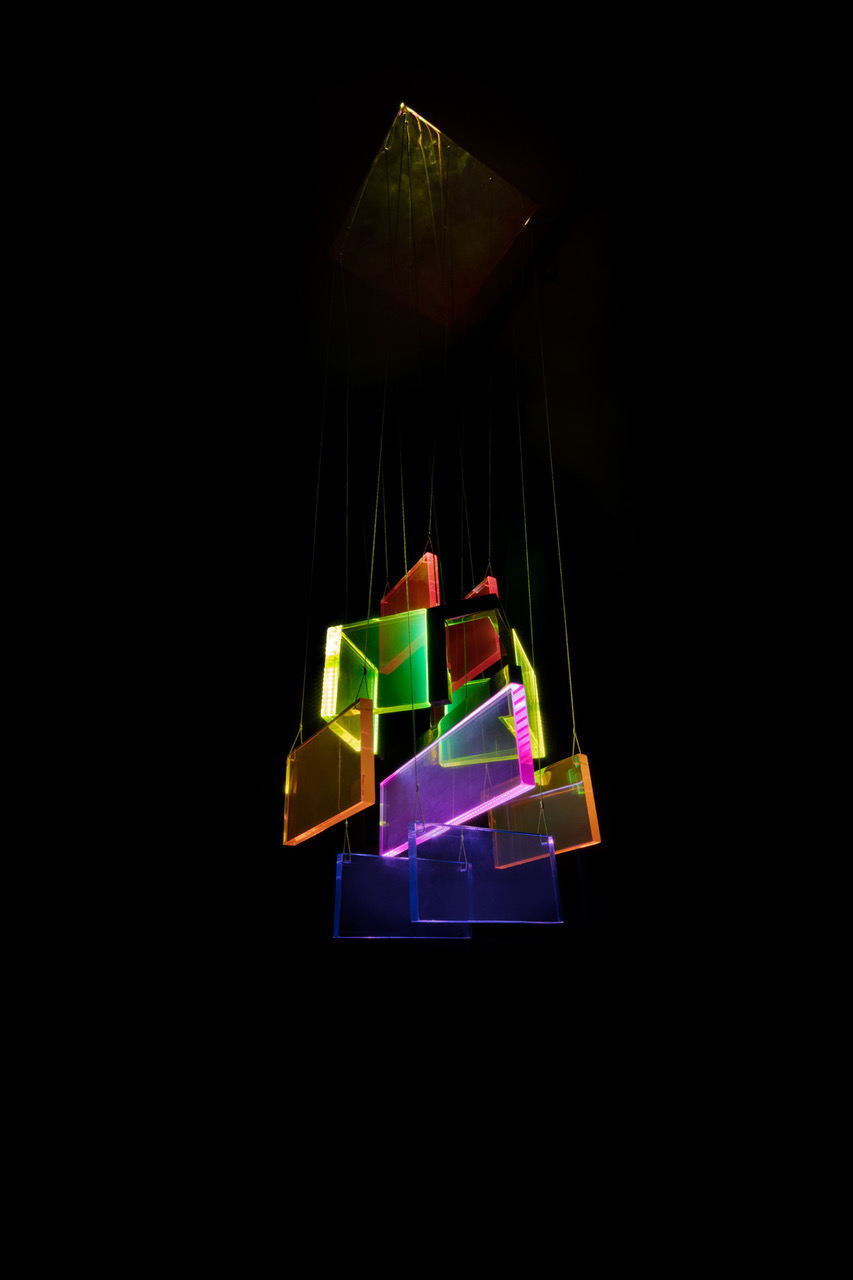 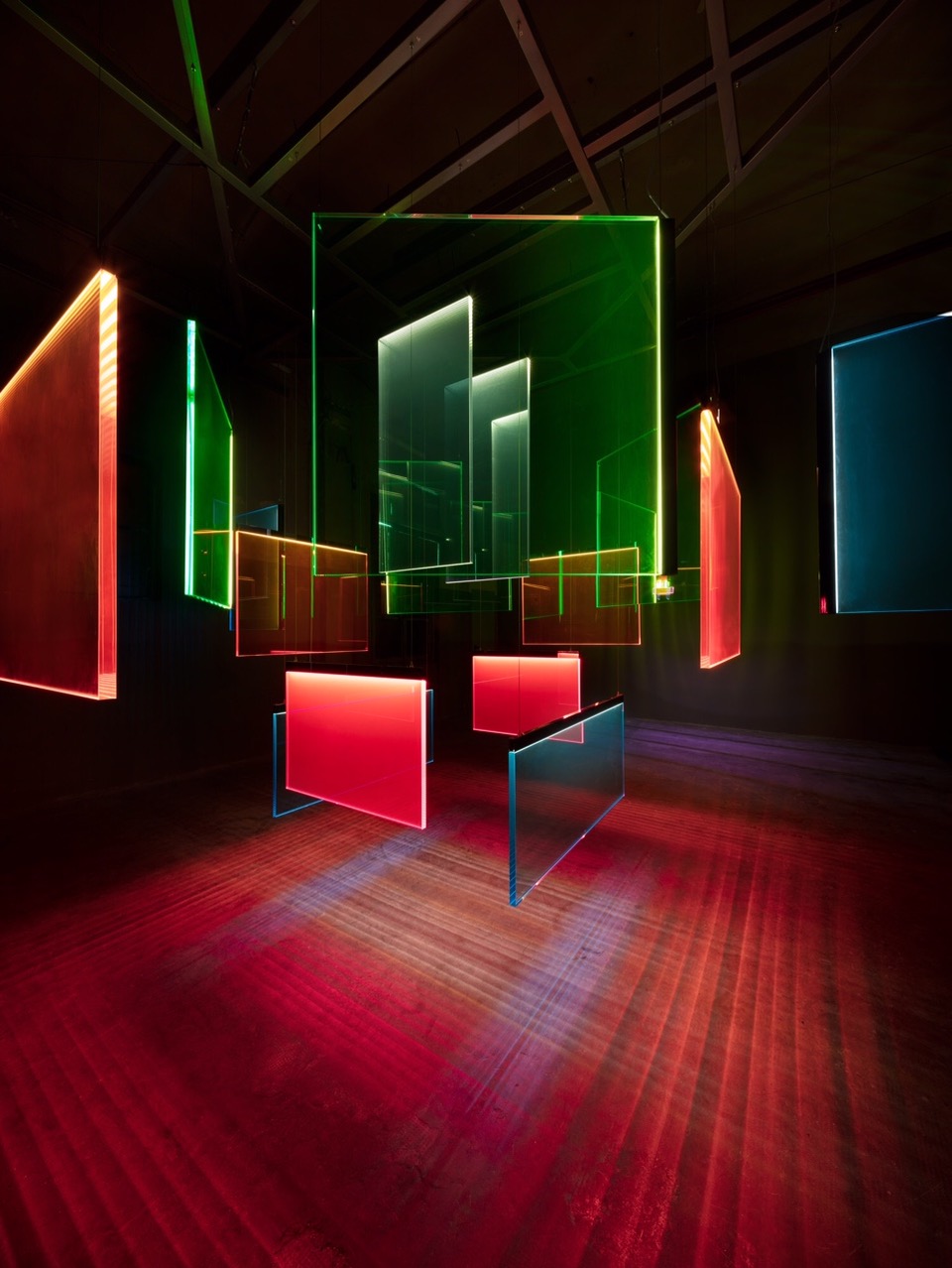 Mandala 1200 was conceived as a smaller version of a walk-in installation completed by Johanna Grawunder for Assab One, Milan in 2018 entitled “Alone Together.” Both versions are defined by singular panels which form a layered volume of light and color. The idea was to use walls of transparent color as construction elements similar to modernist architecture rather than an industrially designed lamp. In this way, the symmetry of the piece (“Mandala”) is evident from all four sides and below/above. READ MORE

As Grawunder states, “the Mandala is a specific turning point for me towards object/experience research. Also, the idea to design a piece that can be scaled from a large walk-in to a smaller “personal” size to the " mini-mandala”- each with different structural and functional criteria but obviously within the same inspiration family is new to me. My work always seems to flit around the worlds of architecture, design, light and functional art. But generally not with the same piece.  This is an attempt to fit into different worlds with a specific aesthetic and formal offering.”

Mandala 1200 consists of separate, thick, clear colored acrylic panels, each one illuminated by a side, top or bottom edge steel profile containing warm LED lights.  The panels conduct light through them, emphasizing the color aspect as well as defining very clearly the outlines of each panel.  When the symmetrical composition is installed, an almost Tron-like line definition of overlapping geometries appears.  The panels are suspended from a top plate by thin steel cables which also bring the electricity.

Trained as an architect, she was drawn to the medium of light early on and has tried to incorporate architectural principles and scale, non-precious building materials and high technology light research into her designs. Her work is included in many museum permanent collections, including the LACMA, SFMOMA, Fine Arts Museum Houston, the Art Institute of Chicago and MAD in Paris.  With a degree in Architecture from California Polytechnic University San Luis Obispo, she studied and worked with Gianni Pettena and Cristiano Toraldo di Francia of Superstudio in Florence (1984-1985) then moved to Milan to work with Sottsass Associati (1985-2001), becoming a partner in 1989. At Sottsass Associati she was involved primarily with architecture and interiors, co-designing with Ettore Sottsass, many of the firm’s most prestigious projects.  In 2001 she opened her own design studio in San Francisco and Milan. In 2018 she was honored as "Designer of Influence" by Collective Design NYC.

Recent commissions include “Coding”- a large public art commission for San Francisco Airport, the exhibition "Alone Together" for Assab One in Milan, and the exhibition design of “Van Cleef & Arpels: Time, Nature, Love” in Palazzo Reale Milan.