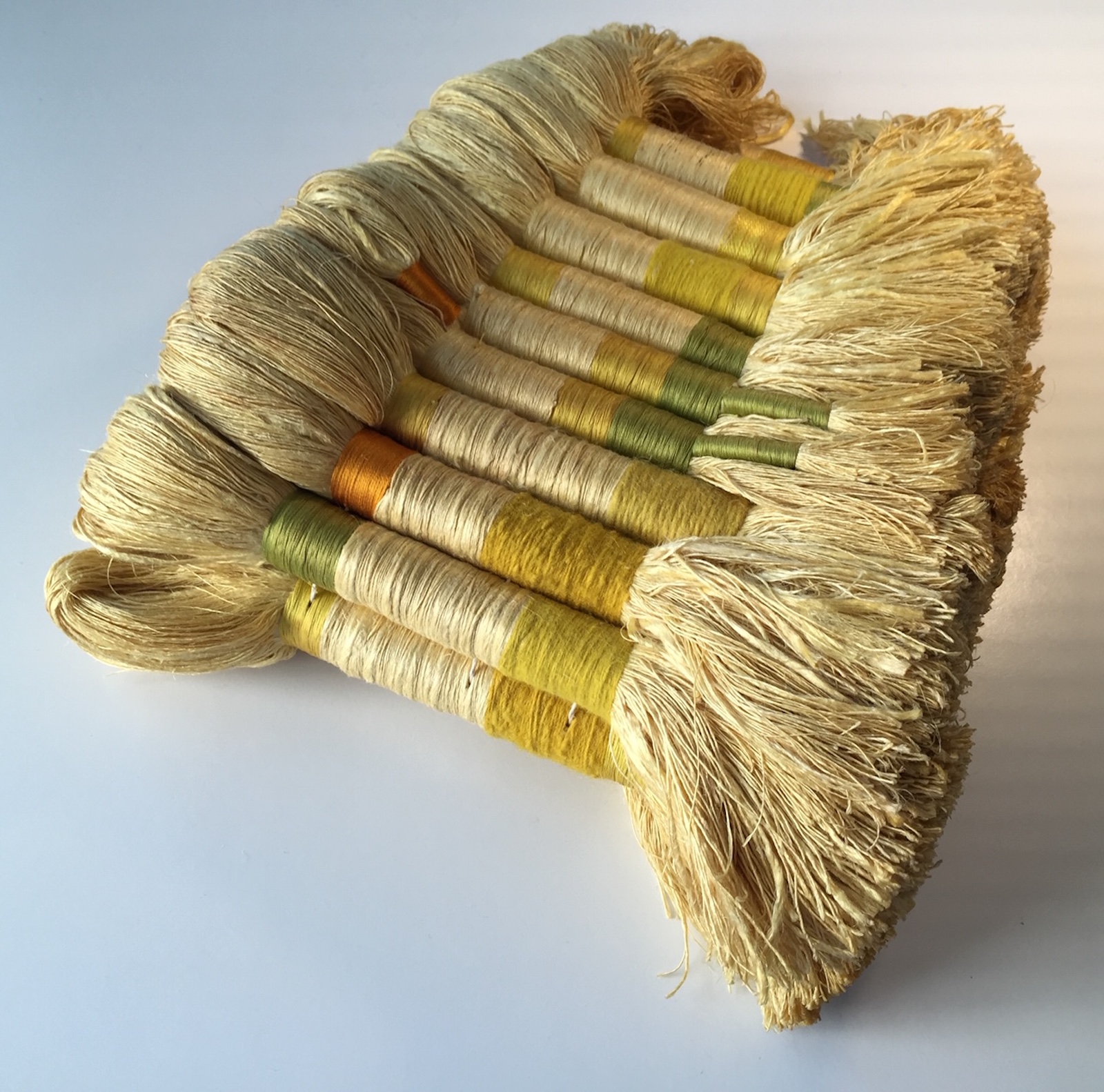 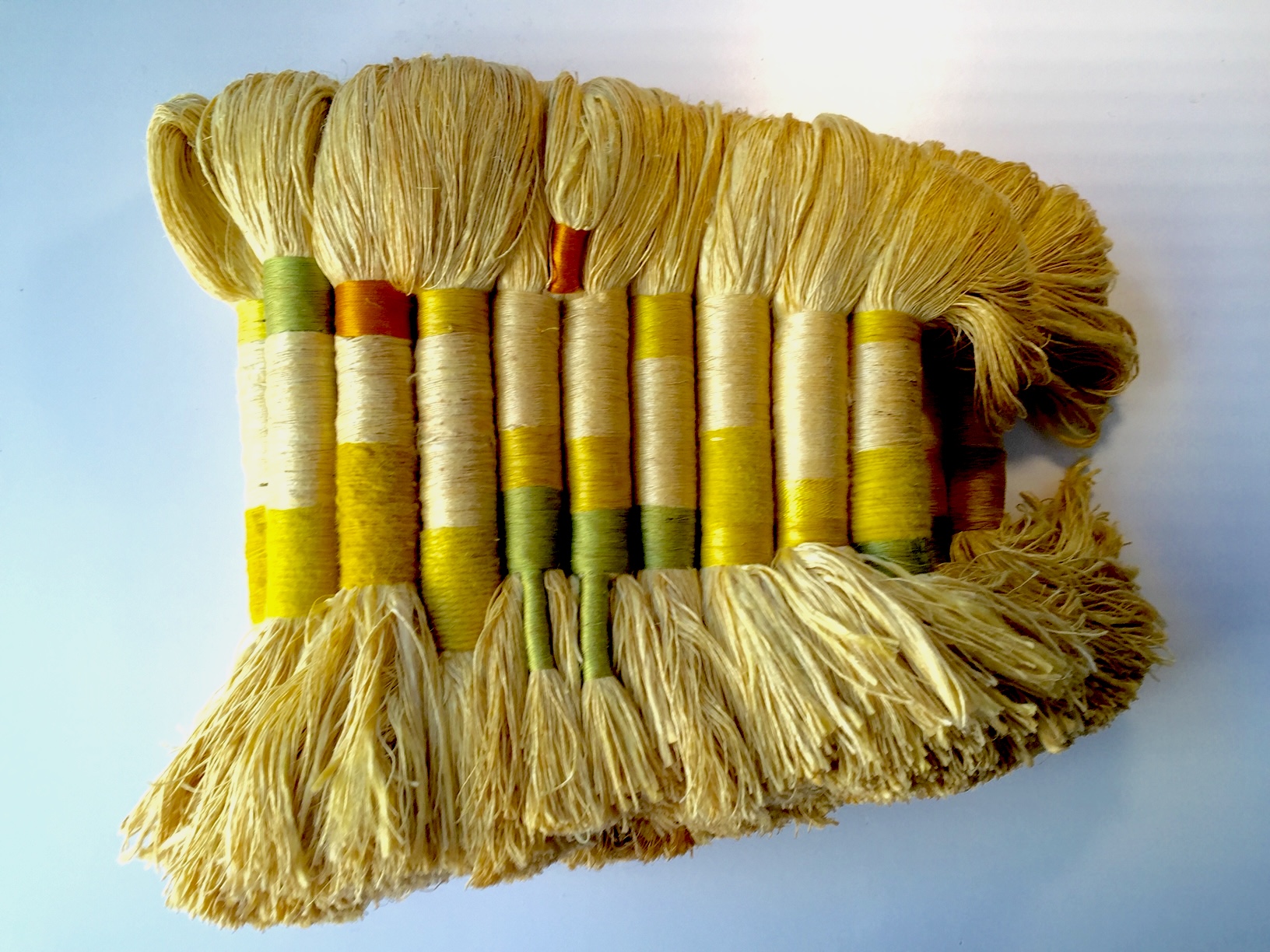 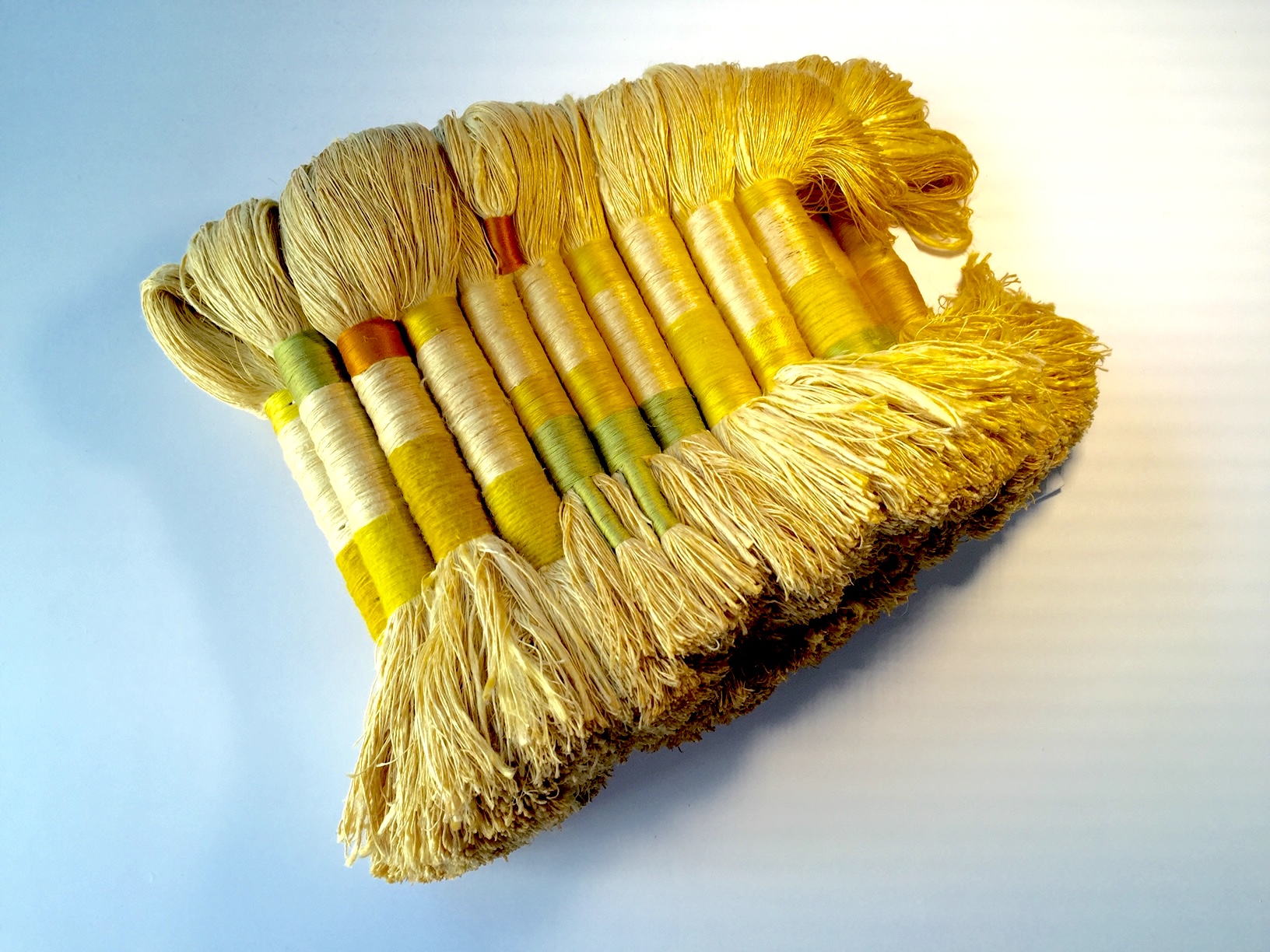 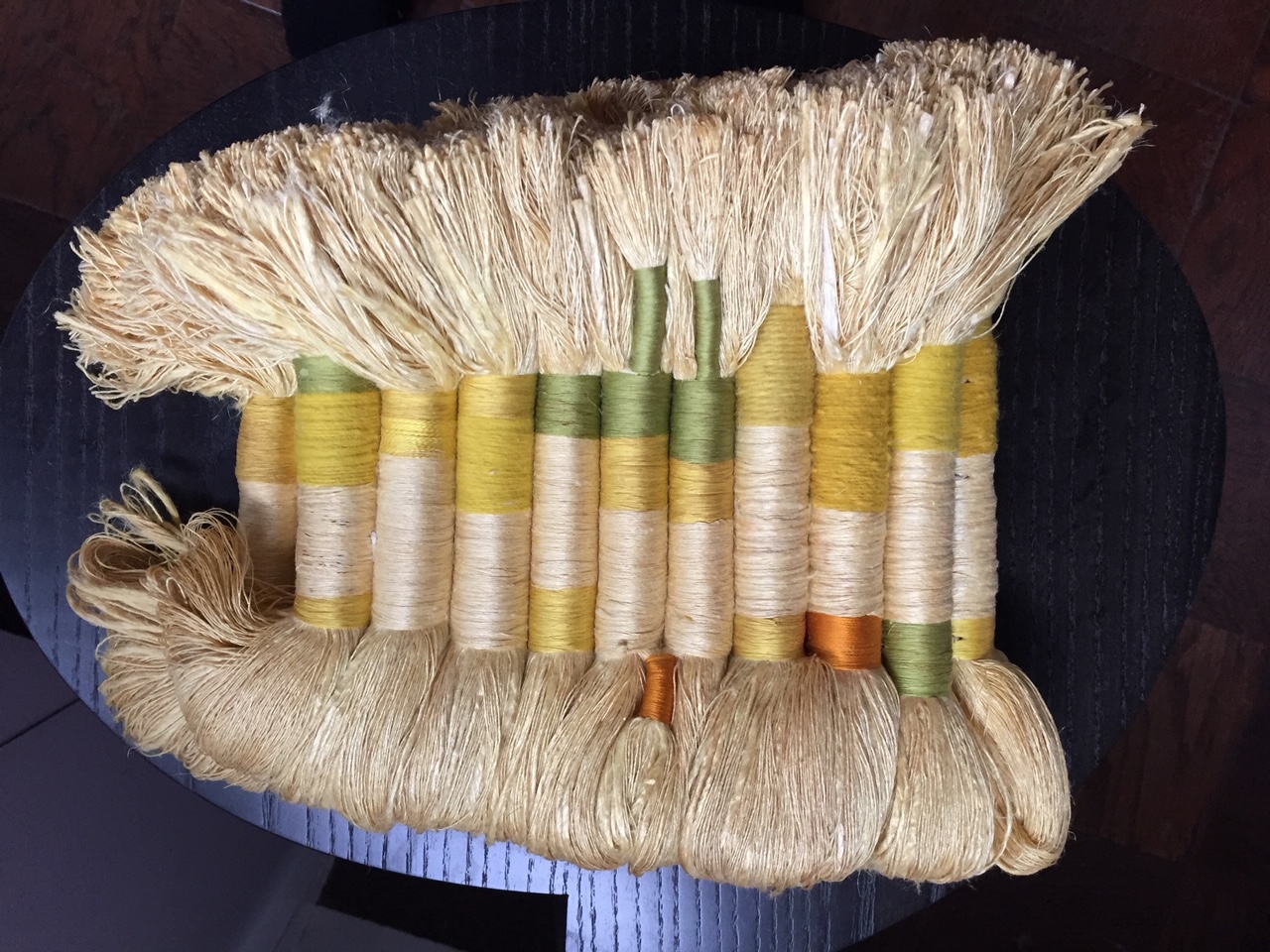 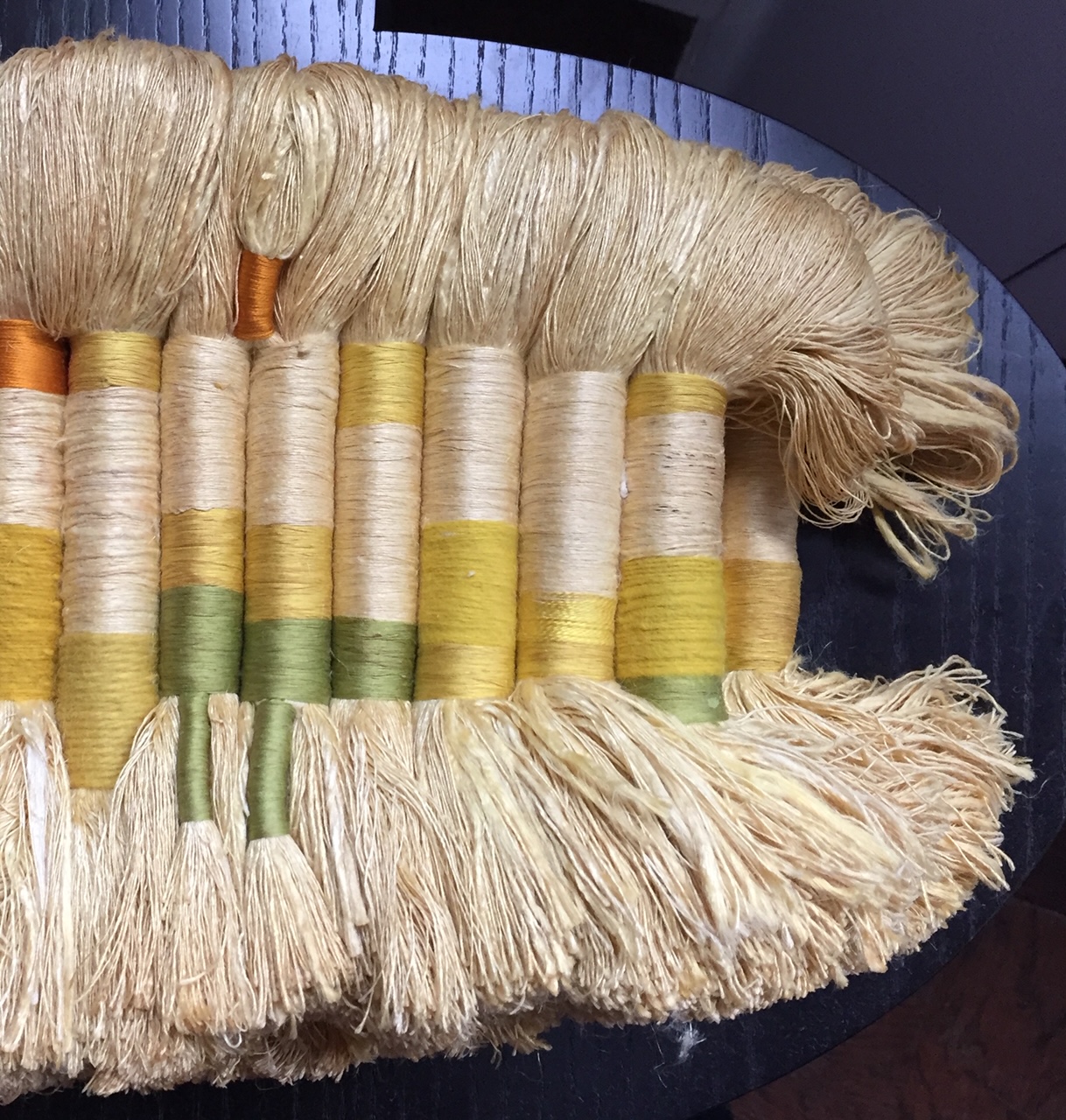 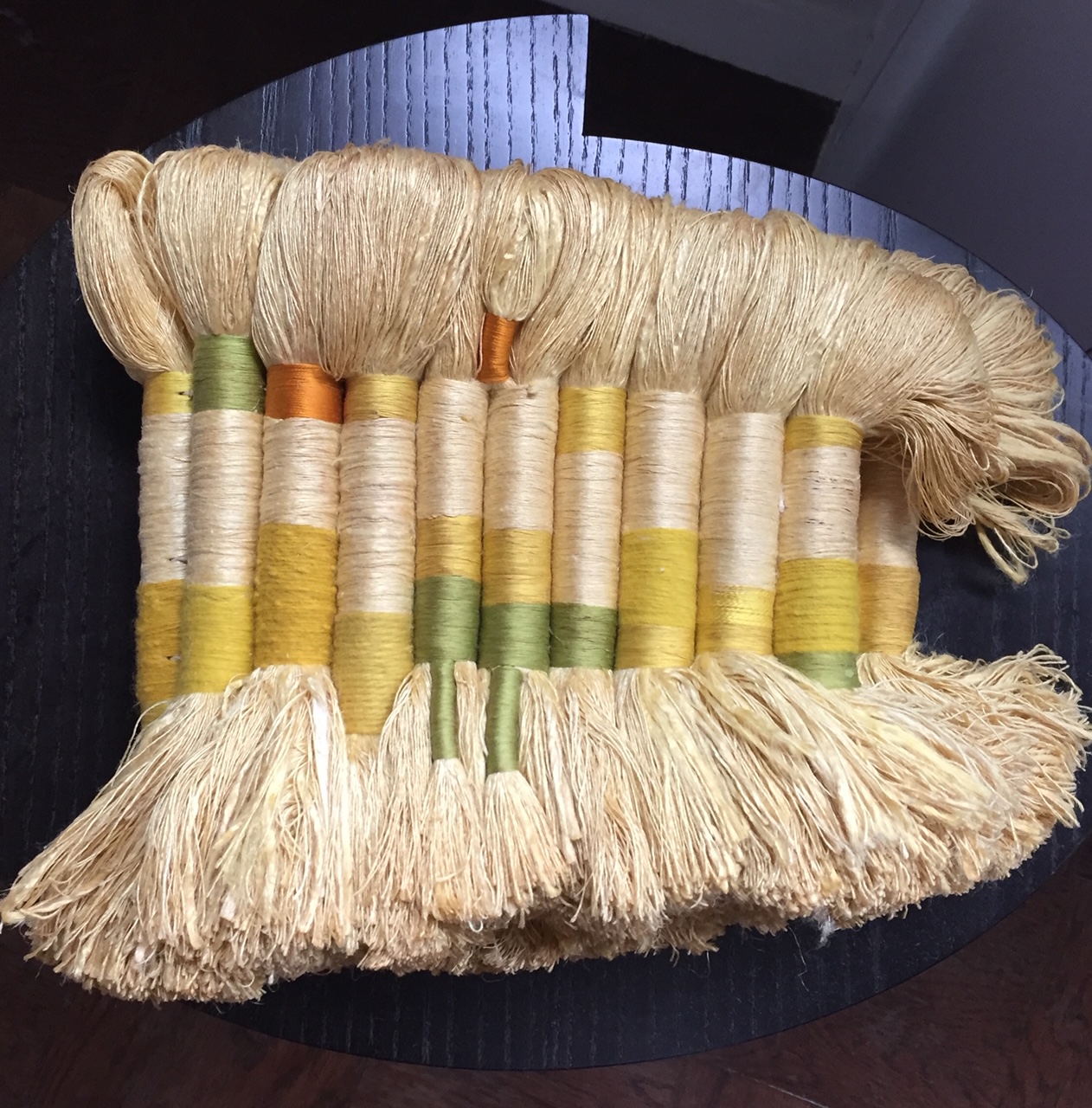 Presented here is a design prototype of a single element created by Hicks in collaboration with local weavers and dyers in northern France in the 1960’s. These elements, bundles of thread dyed in saffron, chartreuse, and chrome yellow, would eventually be stacked and layered to make two large scale installations called Banisteriopsis (collection of Montreal Museum of Fine Arts) and Banisteriopsis II (collection of the Institute of Fine Arts, Boston)....READ MORE

“The work's title refers to the name of a hallucinogenic plant, called the "visionary vine," used by the Jivaro Indians of Amazonia. It is the primary ingredient in an inebriating drink that produces visions in bright yellow-green, among other colors. From the 1950s on, Hicks, who believed her own work to have magical properties, was interested in creative figures such as Antonin Artaud who were known users of mind-expanding substances. The artist envisioned the effects of this plant in the "pure energy of psychedelic color" used in her linen and wool bundles.” From Paul Johnson and Michael Eidelberg (eds.) “Design 1935-1965: What Modern Was,” New York: Harry N Abrahms, 2001.

Sheila Hicks is a contemporary American artist known for her innovative use of weaving and sculptural installations. Ranging from small wall hangings that the artist refers to as minimes, to enormous site-specific works, Hicks’s works blur the distinction between fine art and craft. “Textile had been relegated to a secondary role in our society, to a material that was considered either functional or decorative,” she explained. “I wanted to give it another status and show what an artist can do with these incredible materials.” Born on July 24, 1934 in Hastings, NE, Hicks learned to sew from her grandmother at an early age. She went on to study under Josef Albers at the Yale University School of Art and Architecture, where she received both her BFA and MFA. During her time at university, Hicks was awarded a Fulbright Scholarship to study and produce art in Chile. While abroad, she photographed Peruvian and Bolivian archaeological sites and studied pre-Columbian textile techniques. Moving to Paris in 1964, Hicks has been continually relevant in the contemporary art world, participating in the 2014 Whitney Biennial and the 2017 Venice Biennale. The artist continues to live and works in Paris, France. Her works are held in the collections of the Art Institute of Chicago, the Tate Gallery in London, the Stedelijk Museum in Amsterdam, and The Museum of Modern Art in New York, among others.